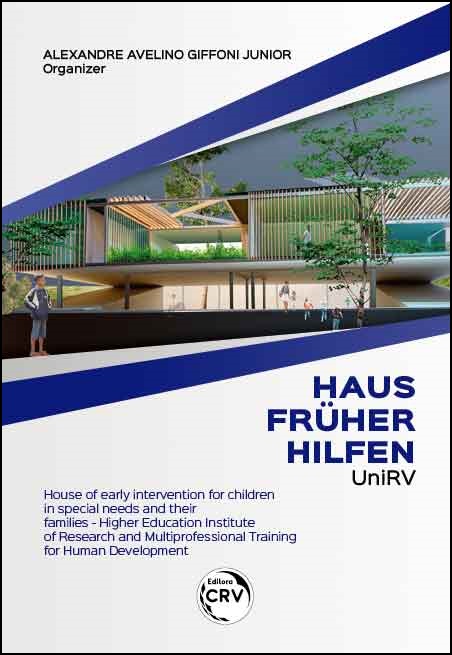 Dr. Giffoni Junior (Org.) presents the results of the Pedagogical-Didactic and Bibliographic Interventionist research of his Post Doctorate at UniSiegen and Haus Früher Hilfen (Germany). The Project aims the construction of a higher education institute for the research and multiprofessional training on early intervention for children in special needs and their families by UniRV (Brazil).

ADRIANO JOSÉ HERTZOG VIEIRA
Doctor of Education: Learning, Curriculum and Teacher Training (2014 / UCB); Master of Education in Curriculum, Culture and Society (2003 / UNISINOS); Bachelor and Degree in Philosophy (1998 / UNILASALLE); Degree in Catechetical Pastoral (1992 / UNILASALLE); Technical Course in Teaching (1990 / CEL); Training in Clinical Psychoanalysis (2007 / ANPC); Training in Vocational Accompaniment and Discernment (1998 / UNILASALLE). He is currently Director of the Transdisciplinary Training Institute Know Care. Pedagogical Advisor at Edebê Brasil Publishing House (since 2014). Pedagogical Advisor of the Vice-Dean of Extension of the University of Passo Fundo / RS (since 2014). Consultant for Teacher Training in the Salesian School Network of Brazil (since 2014); Acted as a lecturer in the Pedagogy Course at the Catholic University of Brasilia (UCB) from 2003 to 2015. In this institution, he was Director of Pastoral Programs (2007 to 2009), Director of the Pedagogy Course (2009 to 2012), Director of Community Programs and Extension (2012 to 2014). At UCB, he also participated in the Extension Advisory Committee (2003-2006), Own Evaluation Committee (2004-2009), the Rector’s Advisory Council (2007-2011) and the Research and Extension Teaching Council (2009-2011). Coordinated the Dream Possible Project, which created the La Salle Elementary School of Sapucaia do Sul / RS (1997 to 2002). He taught Elementary School 1 in 1990/91, Elementary School 2 from 1994 to 1998 and High School from 2002 to 2003. He is a member of the Research Group (CNPq) Ecology of Knowledge, Teaching and Transdisciplinarity. Author of the book Significant Axes: Essay of a Curriculum of Hope in the Contemporary School? (Brasília: Universa, 2008), Organizer with Maria Cândida Moraes and Juan Miguel Batalloso of the book Hope of Pedagogy: Paulo Freire: Conscience and Commitment? (Brasilia: Liberlivro, 2012). Author of numerous scientific articles. Speaker and lecturer at National and International level. Topics: Complex Thinking and Transdisciplinarity; Teacher training; Learning; University Extension; Curriculum; Innovative Pedagogies. Member of the Research Group: Higher Education: Teaching, Research and Extension, UniRV / CNPq.


ANDRIÉLI DE CÁSSIA FERREIRA DOS SANTOS TREICHEL
Master in Social Policy and Regional Dynamics from the Community University of Chapecó Region (UNOCHAPECÓ). Degree in Pedagogy from the Lutheran University of Brazil (ULBRA), specialist in Psych Pedagogy from the University of the City of São Paulo (UNICID), specialist of Education in Special Education from Itapiranga Colleges (FAI-Colleges). Participate in the Research Group called “Regional Development, Public Policy and Governance” linked to the Professional Master in Social and Dynamic Policies of UNOCHAPECÓ. Participate in the Research Group “Higher Education: teaching, research and extension” linked to the University of Rio Verde – UniRV. Acts as a teacher of the undergraduate degree in Pedagogy at the Higher Education Institute Almeida Rodrigues – ISEAR.

ERIKA PEREIRA MACHADO
Postdoctoral student in Health Sciences in the Federal University of Goiás – UFG / GO. PhD in Religious Sciences at the Pontifical Catholic University of Goiás – PUC / GO (2014). Master in Health Sciences at the University of Brasilia – UnB / DF (2006). Specializations in Psychomotricity at Santa Fé do Sul Integrated Colleges (2002) and Methodology and Didactics in Higher Education at Almeida Rodrigues College (2004). Degree in Physiotherapy from the Integrated Colleges of Santa Fé do Sul (2000). Full Professor at UniRV-University of Rio Verde, Director of the Faculty of Physical Therapy / UniRV (second term) – Ordinance Rectory no. 12-R / 2019, Member and Deputy Coordinator of the Animal Use Ethics Committee – CEUA.

SEBASTIÃO LÁZARO PEREIRA
He holds a degree in Electrical Engineering from the Minas Gerais State University (1987), a master’s degree in Economics from the Federal University of Uberlândia (2001) and a doctorate in Social Sciences from the Pontifical Catholic University of São Paulo (2006). He is currently Rector of the University of Rio Verde. Has experience in Political Science. Acting mainly on the following subjects: Social Sciences: Politics, State Reform, Globalization, Neoliberalism, Regionalism, Economic Policy and Public Administration in General.

SUELI PEREIRA CAIXETA
She has a degree in Psychology from the University of Vale do Itajaí (2003), a degree in Pastoral Theology from the Institute of Philosophy and Theology of Goiás (1994), a Master’s degree of Psychology from the Catholic University of Brasilia (2011) and a Doctorate of Education from the Catholic University of Brasilia (2016). She is currently a professor at the Faculty of Psychology of the University of Rio Verde and managing director – partner of the Transdisciplinary Training Institute. Has experience on Education, focusing in Education and Psychology, acting on the following subjects: Education, Psychoanalysis, Psychological Distress, Human Development, Adolescence, Learning Theories, University, and Transdisciplinarity. Member of the Research Group: Higher Education: Teaching, Research and Extension, UniRV / CNPq.

ULRICH EXNER
Since winter 2002: Professor IV for Design and Interior Design at Siegen University. Architect AKH and BDA. 1978-1979: Graphic Design / Münster. 1979-1985: Interior Design at the Lippe University of Applied Sciences in Detmold. 1989: studied Architecture at Städelschule / FfM, Master’s student of Prof. Peter Cook. 1985-1989: freelance associate for various architectural firms. 1990: Founding of the INDEX Architekten architecture firm in Frankfurt / M. 1992: Associate Professor of “Design Fundamentals” at FH Detmold. 1995-1998: Professor FH Wiesbaden . Since 1996: Member of the BDA. 2004: appointment as full professor at UniSiegen. 2008: Appointed Rector of the University of Siegen. He has led several biennial exhibitions and installations with the Music Department and the Architecture Department at UniSiegen in Germany and other countries. He is the winner of several awards and contests in Germany and several other countries. Since 2005: Professor at Yildis University, Istanbul, Turkey. Since 2006: Chairman of the Board of Städelschule Städelschule, Frankfurt. Since 2007: Designlabor Bremerhaven project leader.

WOLFGANG WOERSTER
Since 1990, Wolfgang Woerster he has been designing and managing the interdisciplinary early intervention and family counselling centre “Haus früher Hilfen” in Wiehl (near Cologne) and the multi-professional team focuses on children with specific and circumscribed development issues. The age spectrum includes children from the time of birth to schooling and their primary and secondary caregivers. After training as an educator, he studied social pedagogy and educational science at the universities of Siegen and Marburg from 1978 to 1985. In 1989 he obtained his doctorate in parallel to the management of an integrative work and training project for disadvantaged young people at the University of Siegen on the topic of the development of learning activities. The publication deals with questions of early childhood development aspects. In this context, the child’s perspective on his or her own development in the context of the cultural-historical paradigm is at the centre of attention. Conceptually, he works on questions of the conditions and effects of alienation on the development of bonding, self-efficacy and the development of new forms of professional cooperation.